Do you need to remove the background or cut out the subject from your image? Image editing software such as Photoshop® has tools that can assist in making an automatic clipping path around an image, such as the Magic Wand tool. However, the results are generally poor and will leave jagged edges around the image. Even with the new advanced masking options, it can be difficult to get good results unless your subject is against a plain white background. Free online picture editors won’t create an accurate mask either. At Fake a Photo, we prefer to use our professional photo masking methods to create precise, clean clipping mask results even in cases of images with soft edges and more difficult clipping paths, such as clipping around hair.

In this case, the client wanted to remove the background from the images in order to use them in a website design. We used the photo masking technique listed below. We were able to accurately clip around the details of the drum kit even where the edges were hard to discern in the dark photo. 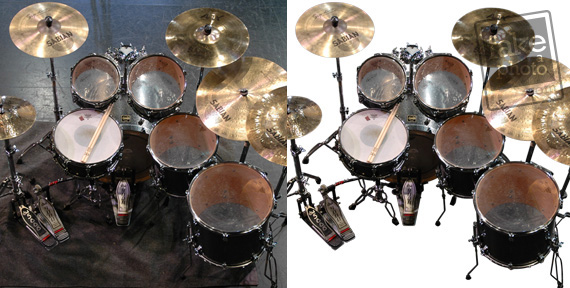 How to Create a Clipping Mask

Photo masking is not that complicated, but can take some time in some cases. If you would like to create the clipping mask yourself, rather than use the Magic Wand tool in Photoshop® or a masking plugin, for better results we recommend using this method, or a similar method using channels: